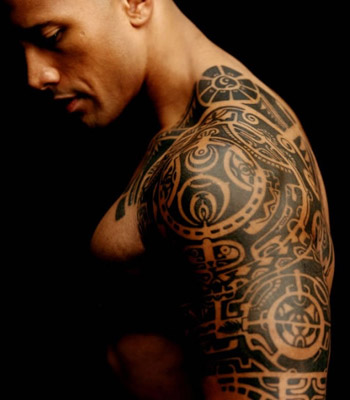 Over the past year, I’ve noticed an excessive amount of tattoos being displayed on people from young to old including all different races and cultures. A large population is currently using their bodies as a walking billboard boldly expressing their ideas and beliefs as a personal statement declaration to the world.

What I really wonder is that do people realize and take into consideration the appearance of these permanent marks once they get old. I compare tattooing to a bumper stick on a Mercedes or Jaguar. The body is valuable and sacred unlike a piece of paper or canvas and once it begins to age it will not have the same colorful, well-defined artistic flair that it once appeared years ago. I also wonder if the ink will eventually cause health problems not to mention a dent in the pocketbook due to the amount of money spent on these elaborate designs.

I really started to notice that it’s not just the average tattoos that would range from a simple heart, anchor or butterfly that I saw years ago but the whole body or partial part of the body being tattooed on a large scale from simple to elaborate patterns, designs, symbols, words and names. I wanted to research the history of tattoos as well as the relation to what the Bible mentions in scripture about marking the body.

“Humans have marked their bodies from the beginning of time. They used tattoos to make statements showing symbols, signs to declare love, forms of punishment, identification and religion or cultural practices.

During the Neolithic Period, the earliest known examples of tattoos stemmed from Egyptian female mummies from 2000 B.C.

Over 5,200 years ago, the iceman was discovered in the area of the Italian-Australian border in 1991. His body included small crosses on his lower spine, right knee and ankle joints which may be believed to be tattoos. Although it’s not confirmed, it is believed that the method was used as a therapeutic treatment due to alleviate joint pain also known as arthritis. This may be the possibly be the earliest evidence of tattooing known.

During the history of tattoos, it was used as a form of decoration, identification, rites of passage, status ranking of power, souvenir during travel or mark of an occasion or ritual practice.

Tattoo comes from the word “Tattan” which means “To Mark,” based from Tahitti and was first mentioned by explorer James Cook’s records from his 1769 expedition to the South Pacific.

Many believe tattoos originated from Egypt during the time of the pharaohs and the Great Pyramids. As the Empire spread, so did the art of tattooing and eventually reached China in 2000 B.C.

In Western Asia, the Aina people used tattoos to attribute to social status which was carried into Japan where it developed as a means of religious practice. While Polynesians used tattoos as an act to denote status.

In Japan, tattooing originates from the Paleolithic Period (around 10,000 BCE) and was mostly used for decorative and spiritual purposes. In 1603-1868, firemen, manual workers and prostitutes wore tattoos to identify their status.  It was eventually abolished by the “Meji” government who banned the art of tattooing viewing it as barbaric and disrespectful.

In Samoan culture, tattooing was an art of celebration of endurance and dedication. The act was very risky due to the high risk of infection caused by the tools used. They used boar’s teeth fastened together with a portion of a turtle shell and wooden handle as their instrument used to mark the body. In their culture, you were labeled as a coward if you did not follow through with marking your body in tradition. You were considered a badge of shame if you did not finish the process and endure the physical pain attributed to tattooing. The traditional female tattoo was called “Mulu” and the male was called, “Pe’a” It was called “Tatau” in Samoan culture where I believe the word “Tattoo” originated from.

In Northern India, permanent tattoos were called “Godna” which was used in tribal populations as cultural symbols. Henna and Mehadi was developed in Ancient India and Egypt and still remains popular today.

In Persia, tattooing, body painting and body piercing has been around for thousands of years and was adopted into American culture.

The Greeks learned about tattooing from the Persians. Women viewed the tattoo as exotic beauty marks. Romans adapted tattooing from the Greeks They viewed tattooing as a form of punishment and slaves were tattooed for identification purposes during the early Roman Empire who were exported to Asia and branded with the words “Tax Paid.”

In ancient Greece, tattoos were used to mark spied while the Romans used it to mark slaves and criminals. It was also carried into American culture where prisoners also began to wear tattoos.

Constantine, the Roman Emperor, banned tattooing on the face. He believed the human face was a representation of the image of God and should not be disfigured or defiled. This also holds truth in correlation to some biblical references.

However, in New Zealand, facial tattoos called, “Moko” was developed.

In Africa, they developed a different technique for tattooing due to the dark pigmentation of their skin. They carved designs and patterns into their skin to create a scar which is also closely related to tattooing. By cutting the skin with a knife or other sharp instrument, they would rub special sand or ashes to enhance the design.”

In the early 1900’s the American style tattoo was birthed in Chatham Square in New York City located in a seaport and entertainment area which attracted a working class population. Lew Alberts trained as a wallpaper designer and transferred his skills to tattoo design. His tattoo designs became well known within the area.

After the Great Depression, the center for tattooing moved to Coney Island and cities where there were a strong military population drawing sailors to get tattoos upon arrival from naval bases to their distant travels around the world.

After World War II, tattoos were associated with Marlon Brando and other such biker types and juvenile delinquents. Tattooing had little respect in American culture and lost its zeal. In 1961, there was an outbreak of hepatitis which caused a decline. Even though most tattoo shops had sterilization machines, few shops followed the regulations. Blood diseases, blood poisoning, hepatitis and other transmitted disease were on the rise.

A health code violation was created and tattoo shops at Times Square and Coney Island were shut down due to lack of sanitary conditions.

Eventually, tattoos gradually became popular again due to the increase of cosmetic surgery and extreme makeovers. Cosmetic tattooing became popular like blush for cheeks, colored lips, eyeliner and most recently eyebrow tattooing. The mass media also has a strong influence on American culture with promoting excessive tattoos on entertainers, musicians and artists. It’s now the norm to display tattoos on the face, neck, hands, body, legs, arms and private areas of the body.

This new form of body art is an expressive way to communicate your personal statements and declarations in life. How far is too far? In the Bible, it states in Leviticus 19:28, “You shall not make any cuttings in your flesh for the dead, nor paint any marks upon you: I am the Lord.” Since our bodies are sacred and was made in God’s image, is this a form of mutilation? The process of transforming the body to desire your own image which makes me question the true nature behind the fascination of marking the body. It also mentions in the Bible, that we are fearfully and wonderfully made. Why is the population so dissatisfied with how they were created? We are to present ourselves as a living sacrifice not only morally and spiritually but also physically which includes taking care of our bodies. It is truly disturbing to see the human body being used as a canvas or T-shirt to display an advertisement which may not be your personal statement years from now when you have changed, transformed and experienced new things in life. Once you believed or thought was cute or sexy then may be 180 degrees different later in life.

The fear of not being well- informed about the mark of the beast is tragic to the lost of souls who feel it’s ok to mark the body with symbols and signs. Even the fact that some  people don’t really understand the implications of wearing skeleton bones, skulls, guns and other symbols to represent death, is very disturbing.

We are currently entering a period, in the last days, where the antichrist will disguise himself from even the very elect as it states in the Bible. He will eventually become very powerful and rule the economic system where the population will not be able to buy or sell.  If you do not take the mark of the beast acknowledging him as the Savior, you will succumb to suffering and tribulations on the earth. However, if you decide to take the mark, you will denounce Jesus as Lord and Savior and would never be able to enter the Kingdom of God and your soul will be owned by Satin for eternity. You will be granted food, clothes and shelter including all the comforts of life such as economic wealth to meet your needs while on earth.

You do not want to accept the mark of the beast. This will damn your soul to hell for eternity. As I steady see the incline of interest in tattoos, I sometimes truly wonder if tattooing is a precursor to what is yet to come. As I look at what’s going on in the earth, I feel we are living in reference to Matthew 24 which mentions the earth is like a woman in travail birthing earthquakes, floods, trials and tribulations, rumors of wars, disease and pestilence and other disturbing prophetic events to come in the future as mentioned in Revelations.

Although I do not agree with tattooing the body, I am not judging anyone who decides to wear one. I was interested in learning the history behind tattoos and how it relates to the Bible. But as a believer, I do feel the need to warn or sound the trumpet for those who are walking in darkness and do not understand the reasons why they got a tattoo in the first place which could perhaps be just because it’s the “IN” thing to do right now and since everybody else is getting one, why not? Which may lead you to simply agree to accepting the mark of the beast in the future. I would challenge you to prepare yourselves for the last days which is upon us right now with everything that is happening in the world. It is time to get serious about your life, faith, direction and purpose and most of all where you will spend eternity.

3 thoughts on “The World History of Tattoos-Then, Now and in the Future”

This site uses Akismet to reduce spam. Learn how your comment data is processed.